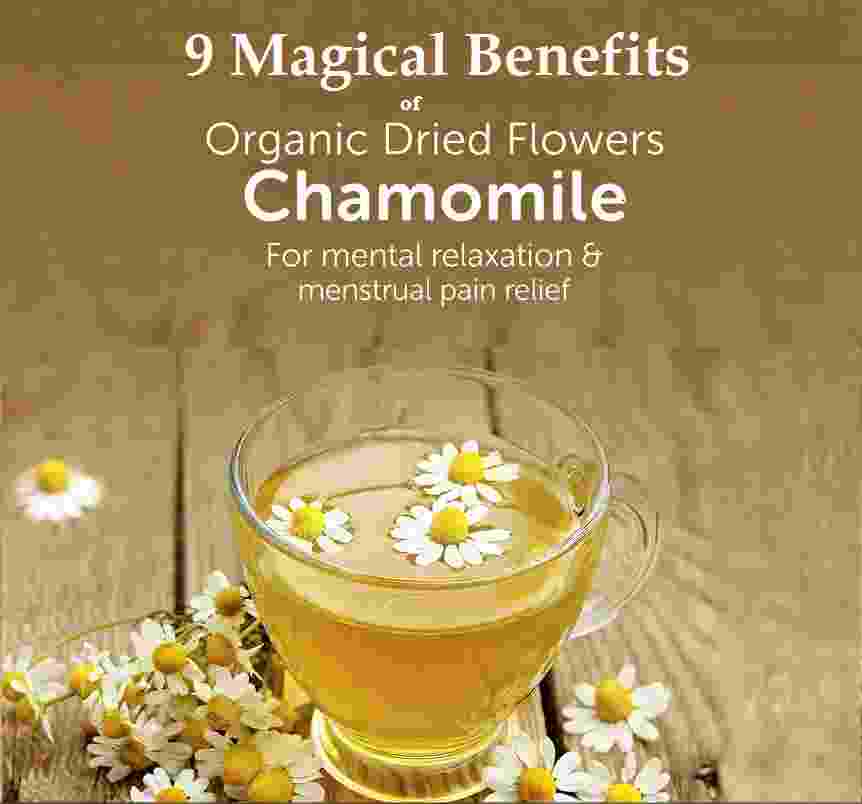 9 Magical Benefits of Chamomile Tea, History, Nutritional Value & Side Effects: Chamomile tea is a herbal drink made from dried flowers of a type of daisy called Matricaria chamomilla or German Chamomile, is also known by the Latin binomial Matricaria chamomilla, (Source: herbalgram.com) although the synonyms M. recutita and Chamomilla recutita are still used by some. It is a popular &  traditional herbal drink and has been used for centuries to treat anxiety, insomnia, irritability and other conditions.

The plant originates in Egypt, where it was used to treat wounds. Still, some historians believe it was introduced to Europe by the Arabs during the Middle Ages, who also used it as a medicinal herb. The Arabs may have brought it as far east as India, where it was incorporated into Ayurvedic medicine.

The Chamomile flowers have a taste described as apple-flavoured. The benefits of this tea are many. It is a soothing herbal drink that helps calm the nerves and promote sleep. It also has anti-inflammatory properties for the digestive system, which can help reduce stomach cramps and inflammation in the intestines. Chamomile can also help relieve headaches from high blood pressure or migraines—

What is Chamomile Tea?

Chamomile is a plant that can grow in dry, cool climates and has been used for centuries as a medicinal herb. The plant’s flowers are dried to make tea.

Chamomile originated in the Mediterranean region (Source: biolandes.com) and was brought over to Europe by the Romans. It was then introduced into North America by European settlers during the 17th century.

The first recorded use of Chamomile dates back to Ancient Egypt, where it was used as an anti-inflammatory agent, digestive aid, and fever reducer. The Egyptians also used it to treat skin conditions like eczema, acne and psoriasis.

Chamomile tea is a kind of herbal tea made from dried chamomile flowers. It is used as a mild sedative to relieve stress and promote sleep. Some people drink it for its calming properties, while others drink it to help with sleep or indigestion. Chamomile tea has been used for centuries, and many believe this herbal beverage can provide health benefits.

When infusing water with chamomile flowers, the oil-containing compounds are drawn into the water. When it is heated, they boil and release oil that floats to the surface of the liquid. Some people use cold or room temperature water when brewing chamomile tea to prevent this. However, boiling or near-boiling water can be used if you want to brew a milder tasting cup of chamomile tea (source: lybrate.com).

Chamomile is a herb that is considered to be one of the most well-known herbs in the world. The Chamomile plant has been used for many centuries for its healing properties.

Side effect of Chamomile Tea

The side effects of drinking Chamomile Tea are minor if any at all. Some people may experience drowsiness, bloating, or diarrhoea if allergic to ragweed flowers and chamomile plants.

According to www.nccih.nih.gov, Rare cases of anaphylaxis (a potentially fatal allergic reaction) have been reported in people who have consumed or been exposed to chamomile products.